Men’s magazines are as interesting as women’s and this is evident from the popularity of magazines like Maxim, Playboy and GQ. Each magazine is unique because it caters to theneeds of the men. A man is a mix of personality – he’s a workhorse at the office; guardi 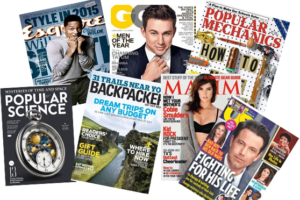 an at home; a friend in society and life partner in bed.

Widely read for their content and photography, men’s magazines work as lighthouses for the dominant male members of the society. You can choose a magazine and subscribe it from Magsstore.com.

Maxim: This men’s magazine is credited for amazing photography of female celebrities including actresses, singers and models. Famous for skin, Maxim handpicks women with substance for photography and it is planning to repeat the success in the world of fashion. Men’s world is smaller in comparison to women’s but Maxim is determined to add more colors and flavors to the men’s world through its photography. Magsstore offering  discount on Maxim Digital Magazine Subscription.

US Weekly: Popular for featuringsecret relationships of celebrities, the magazine has developed a style for publishing celebrity news, latest fashion trends and entertainment. Every year, US Weekly releases several signature issues like Hot Hollywood in spring and young Hollywood in spring.Also, there are issues like Best Bodies and Best Makeover.It boasts of a circulation of more than 1.95 million copies weekly.

Popular Mechanics: It is a classic science and technology magazine available in nine international editions. Popular Machines magazines are equally popular in Russia and the US. This magazine focusses on popular topics including automotive, home and outdoor. It selects topics that are popular among women. It has a recurring column on Jay Leno’s Garage and as the name suggests it is only automotive technology. And this column is quite popular among vehicle enthusiasts.

GQ Gentlemen’s Quarterly: This magazine is internationally acclaimed for developing a culture for men. This men’s magazine focuses on recently received Pulitzer Prize for an article about Dylann Roof. The GQ 2018 (USA) was selected for the coveted prize for its story of a man who shot dead nine African Americans in a Church in Charleston. It writes profoundly on a wide range of topics including travel, sports, music, food and sex. It also discusses popular books.

Esquire: Another popular men’s magazine in the US, Esquire survived the Great Depression of the 1930s under the aegis of its founder members. It has three founders Arnold Gingrich, David A. Smart and Henry L. Jackson. This magazine witnessed many ups and downs in its 80 years old history. It takes a mix of issues including fashion that was its price focus in its early years. One of its founders Henry L. Jackson led the fashion part of the magazine in its early years. Magsstore offering Esquire magazine subscription with upto 65%

Popular Science: Popular as PopSci, it carries popular science content for general readers that have little knowledge of science. The magazine accumulated over 58 awards including General Excellence and Best Magazine Section. Popular among the masses, it is translated into over 30 languages and it reaches to over 45 countries. Originally a monthly publication, the magazine switched to bi-monthly publishing after 144 years.

Backpacker: This magazine provides more information than simply backpacking and hiking. It coversthe entire wilderness and focuses on each outdoor sport or activity you can think of enjoying in the open. It publishes 9 issues every year and each issue contains interesting reading material like user reviews on outdoor gears, survival tips, coverage of popular destinations and advice for travelers.It also publishes an annual gear guide in the month of April.

Maxim and Playboy look similar in content but in reality, they are different. While Maxim relies more on celebrity photography, Playboy caters to the sexual desires of men. You can subscribe to both the magazines at Magsstore.com. Similarly, you can choose a magazine from Esquire and Men’s Journal and becomes its subscriber to get a regular copy of the publication

Men’s have got their magazines that discuss the issues men face. The aforementioned magazines discuss a wide range of topic including but not limited to sex and personal relations. These magazines have added more colors to the black-and-white world of men’s. Subscribe a magazine of your choice.